On the first of November I traveled with an old friend to London.  The purpose of our trip was to see Sophocles’ play Elektra in The Old Vic. After an uneventful journey, our Eurostar reached St Pancras station around 9 o’clock in the morning. Being both avid Harry Potter fans we crossed the street to King’s Cross station to look for the Platform 9 and 3/4. We overlooked the huge queue at the photo opportunity and the HP shop and wandered a bit lost through the station, until at last we noticed the large crowd. In the shop/tourist trap I resisted the urge to buy a Slytherin Quidditch jumper.

The weather was nice: the sun was out and for a first of November it was quite warm. We decided not to use public transportation, and to walk through the city. We followed Grays Inn road towards the City of London and Saint Paul’s Cathedral, buying a cup of coffee in a Costa along the way. The smell of roasted nuts greetings as we crossed the Millennium bridge, after which we walked along the south bank towards Westminster. Hunger was starting to rear its head, so we stacked up with calories by eating a McDonald’s burger 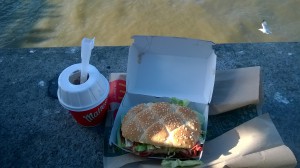 After lunch we continued to Tate Britain for ‘Late Turner – Painting Set Free‘, a temporary exhibition devoted to the works that JMW Turner produced during the later years of his life. It’s a wonderful collection and  I really loved it. The exhibition runs until the 25th of January, 2015 and I highly recommend it.

We had booked a room at Westminster Tune Hotel not far from The Old Vic. The room was clean and silent, the staff was polite and helpful: this all for £75 in London isn’t a bad deal. We asked reception for the nearest Nando’s and enjoyed some grilled chicken before going to the theater. We walked to The Old Vic and because there was still some time before the start of the performance,  we decided to have a drink in the Pit Bar, the bar below The Old Vic, but here it was already quite crowded. We skipped drinks, exchanged our vouchers for program books and read them while standing outside the theater.

We had seats on the fourth row of the stalls, so the actors were performing at a few meters at eye height: great seats, and all things considered not that expensive: £85. 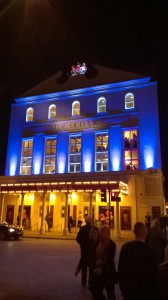 The Old Vic’s podium setting is for the moment round, with the spectators sitting around it for about 270 degrees. The other ninety was reserved for a large door: the entry of Elektra’s home. In fact we walked round/over the podium to get to our seats. Once we were all seated, the lights dimmed a bit and a large man walked up the podium from a corridor and the performance started. Kirsten Scott Thomas performance as Elektra was intense, but sometimes it balanced on that of a caricature. Overall we both were highly impressed by the performance, the hour and forty five minutes were over in the blink of an eye; superb experience.

We left The Old Vic tingling from exhilaration, went looking for a pub and found The Duke of Sussex. Although it looked like a traditional English pub, it had a karaoke stand and one of the employees was doing his best to get it going, with a bit of success. 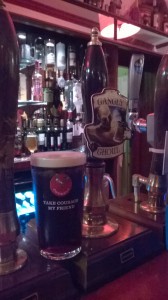 After a pint of cider, we tried some British ale, a pint of Gangly Ghoul. It did not rock my world. Getting tried of a long day, we walked back to the hotel and stopped along the way in a night shop for water and donuts. 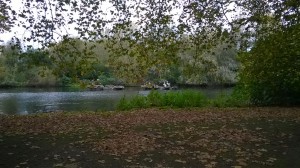 After a good night’s sleep we checked out of the hotel and went looking for a place were we good get a traditional English breakfast. We crossed the river Thames, went through St James Park, where we saw the Pelicans and lots of squirrels, past Buckingham Palace into Brompton Road where across the street from Harrods we found Richoux. A small tea room with traditional English breakfast, without beans: so does this still count as traditional? During our breakfast rain started to pour down from heaven. Our current goal was the temporary Constable exhibition at the Victoria & Albert Museum, which was at a distance of about 500 meters from our current position. We risked our dryness and steady stomach, and ran through the rain to the museum. It was nice exhibition, but I prefer Turner, for my friend it was the other way around. We skipped the ‘Wedding Dresses 1775-2014‘ exhibition and left the museum for a stroll through Harrods.

The sky had cleared up a bit, and it remained dry for the remainder of the day. We believed you could find anything in Harrods, but after examination we are quite sure there are no puppies! Disappointed we left the store and crossed Hyde Park to Speaker’s Corner and Oxford Street. Even after devouring a traditional English breakfast, all the running and walking made us hungry, so when we passed a Nicholson’s pub called the Pontefract Castle at the corner of Wigmore Street and St Christopher’s Place, we went in for Fish & Chips. We sat at table and were ignored for about twenty minutes, after which we left, hungry and annoyed. We walked to Piccadilly Circus and on the way we found another Nicholson’s pub in Kingly street: The Clachan. Here we made sure we were not ignored and had a decent plate of Fish and Chips: yum.

We still had a bit of time to kill before heading back to St Pancras, so we went to Trafalgar Square, which for the moment has a Big Blue Cock erected on its fourth plinth, 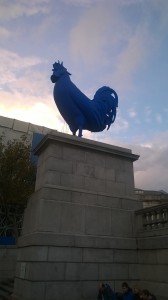 and strolled through the National Gallery, visiting some of our favorite paintings: A View of Het Steen in the Early Morning, The Arnolfini Portrait and  Sunflowers. A great way of finishing a great weekend.